A family run business since 1919 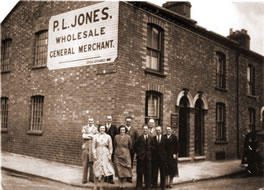 Jones Wholesale Business Store is a fourth generation family business and we are very proud of our heritage and humble beginnings.

In 1919, after the First World War, Corporal Percy Lewis Jones left the Royal Artillery and established his own business called simply ‘PL Jones’. Percy rented a two shillings a week lock up and drawing from his experience gained before the war in the drapery and haberdashery trade he began delivering goods on his bike in and around Northampton. 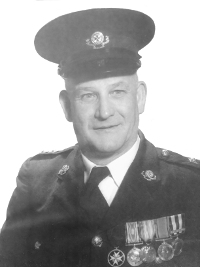 By 1925, with the support of his wife Jessie and his daughter Elsie, he had expanded into a two storey premises in Woodford Street and purchased his first van. From here Percy and family would mix ingredients for products such as soap powders and medicines and by the 1930s chemist’s sundries and hardware lines were added to the range.

From there it was a steady development and in 1948 the company became P.L Jones Ltd. In 1957 the company moved premises into a large factory in Garfield Street where they merged with a local sweet manufacturer.

Following visits in the 1960s to the United States and to sites in the UK it was decided that the future lay in cash and carry and in 1968 deliveries were ceased as the business became 100% Cash and Carry. Five years later the business became the partnership ‘Jones Wholesale Cash and Carry’ and in 1982 moved to a 35,000sqft warehouse at its current site in Heathfield Way.

Today, nearly 100 years on, Jones Wholesale Business Store is still family run wholesale cash and carry. With approximately 20,000 lines in stock,we have everything your shop or business needs. We are proud of our store and of our experienced and friendly staff who are always happy to assist. So why not come in and visit us, or if you don’t have the time, shop online.